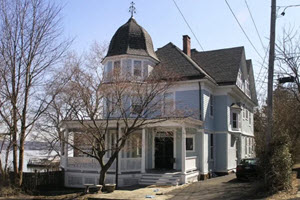 Cynthia Ackley Kavanagh recalls sitting on her bed in her new home when the cord to the light above began swinging in a way that she had never seen before. It wasn’t sloping in an arc as it should. Instead, it was as if some invisible force were playing pingpong with the pull switch.

The year was 1967. Her father had gotten a job in New York City, and the family had recently traded their Maryland farm for a derelict Victorian just north of New York City. Her parents, Helen and George Ackley, were determined to restore the run-down, 4,200-square-foot house on the Hudson River, where they planned to raise their four children.

Built in 1890, the house in Nyack had sat vacant for seven years before the Ackleys bought it. During that time, neighborhood children would say they saw faces in the windows.

Over their two decades in the home, the Ackleys would have many inexplicable experiences. They heard mysterious footsteps and voices. Doors and windows would fly open. On several occasions, they claimed, they even received visits from peaceful spirits wearing clothes from centuries past. The paranormal was just part and parcel of their new home.